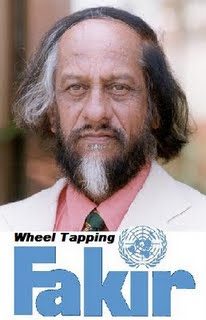 Dr Pachauri also keeps some ties with his roots. In his capacity as a former railway engineer, he is a member of the Policy Advisory Panel for the French national railway system, SNCF and has been since April 2007. Long before that, Dr Pachauri became the President of the Asian Energy Institute, a position he took on in 1992.

The climate change hero is quick with his answers, but doubts over his links linger.

Member, Editorial Board, International Journal of Regulation and Governance, TERI.

Member, International Advisory Board for the Climate Protection Initiative of the German Federal Ministry for the Environment, Nature Conservation and Nuclear Safety (BMU), November 2008 onwards

Member of the Board, Glitnir Globe – The Sustainable Future Fund, Iceland, June 2008 onwards

Member of the Board, International Risk Governance Council, Geneva, Switzerland, May 2008 onwards

Member, Advisory Senate for the Ice Organization, May 2007 onwards (for three years)

Member, World Energy Council London, Advisory Board of Commission on « Energy for Tomorrow’s World – the realities, real options and the Agenda for Achievement », 1990–1993.

Member, Task Force on US Global Strategy: Implications and Suggested Response, constituted by the Prime Minister of India, November 2005.

Member, Advisory Board on Energy (ABE), Government of India, New Delhi, 1983 to 1988 (The Board reported directly to the Prime Minister of India).

Chairman, Committee set up in terms of the order of the Hon’ble High Court of Judicature at Allahabad, Lucknow Bench regarding setting up of a Refinery at Rae Bareli, Ministry of Petroleum & Natural Gas, Government of India. 1996.

Member, Committee to examine all aspects of ONGC’s existing organisation with a view to examining the need for its restructuring, Government of India, New Delhi, June 1992.

On 20 December 2009 we published an article about Dr Pachauri and his business interests. It was not intended to suggest that Dr Pachauri was corrupt or abusing his position as head of the IPCC and we accept KPMG found Dr Pachauri had not made « millions of dollars » in recent years. We apologise to Dr Pachauri for any embarrassment caused.

we accept KPMG found Dr Pachauri had not made “millions of dollars” in recent years.

Reviewed personal bank account, income tax returns and other books of account maintained by Dr. Pachauri, as provided by him and his tax counsel, Mr. Ashok Khurana

We were informed that Dr. Pachauri does not hold or operate any other bank accounts other than those mentioned above.

We were informed that all expenses and incomes pertaining to Dr. Pachauri’s projects are usually recorded in following two sub ledger account codes: 2007 DG 11 – for the period 1 April 2007 to 31 March 2009 2009 DO 01 – for the period 1 April 2009 to 31 March 2010
We performed an analysis of the above mentioned account codes and reviewed transactions on a sample basis.

This report is based on information provided to us by TERI, Dr. Pachauri and his tax counsel. Work done by us was as considered necessary at the given point in time. Third party evidence has not been verified.

Our work constituted limited review, and the scope of our work was significantly different from that of an audit and cannot therefore be relied upon to provide the same level of assurance as an audit.


This report is based on information provided to us by TERI, Dr. Pachauri and his tax counsel. Work done by us was as considered necessary at the given point in time. Third party evidence has not been verified.

Several environmentalists, UK MPs and scientists has called for the resignation of Rajendra Pachauri, chair of the UN’s climate science body.

Sorry, the comment form is closed at this time.